The Liao Long Project is located on the eastern edge of the Tibetan Plateau in Sichuan Province, China.  It consists of an exploration permit of 8.87 square km located in the “Three Rivers” metallogenic province.  Skarn-type mineralization is centered upon 99°33’00” east longitude and 30°35’11” north latitude at elevations between approximately 4,600 m and 5,000 m.

The area of interest is located at the eastern end of the Tibetan Plateau, which has been uplifted from approximately 50 million years ago by the north-eastward movement of the Indian Plate (Figure 4)

Figure 5 shows the local geology with the exploration permit area superimposed.  The area is within the important 锟斤拷 Three Rivers 锟斤拷 metallogenic province, which contains numerous mines for the production of silver, copper, lead, zinc and gold.  Of note is the important Gacun Ag, Cu, Pb, Zn underground mine recently put into production at a rate of 1,500 tpd.  This mine is of the “black smoker” or syngenetic sea-floor type and is only about 50 km north of the subject property.  The Xiasai Ag, Zn, Pb shear zone type deposit is only a few km to the south from the subject property (on the other side of a high mountain range).  This small ex-producer is undergoing exploration by Western Mining Co. Ltd, a large integrated Chinese mining and metal producing company with operations in Sichuan, Tibet, and Qinghai. 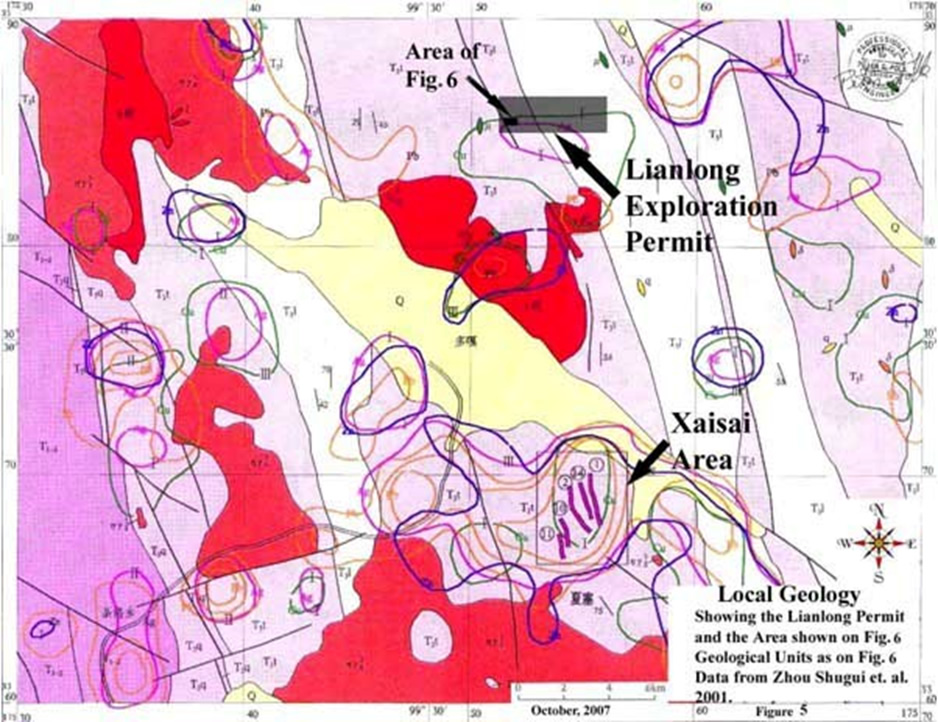 The property is centered upon an east-flowing glacial stream, which originates from two small mountain glaciers.  Elevations range from about 4,200 m to about 5,700 m with the main mineral occurrence at around 4,800 m in an area of glacially-scoured bedrock located below one of the small glaciers.

Three small granite bodies, probably connected at depth, intrude into a sequence of steeply dipping overturned beds of upper triassic limestone, calcareous sandstone of the Qugasi Group, and rhyolite.  A halo of calc-silicate metasomatism has affected the intruded beds to form garnet, diopside, and idocrase skarn.  The skarn alteration forms along preferred permeable and reactive beds and is very extensive.  Three elongate-tabular-lenticular bands of sulphide-oxide mineralization have formed within the zone of skarn along preferred beds.  A small fourth zone consisting of an irregular pod in limestone is not conformable to the bedding.  Mineralization, which will be described in detail in a following section, contains values in Cu, Sn, Ag, Zn, and Pb. 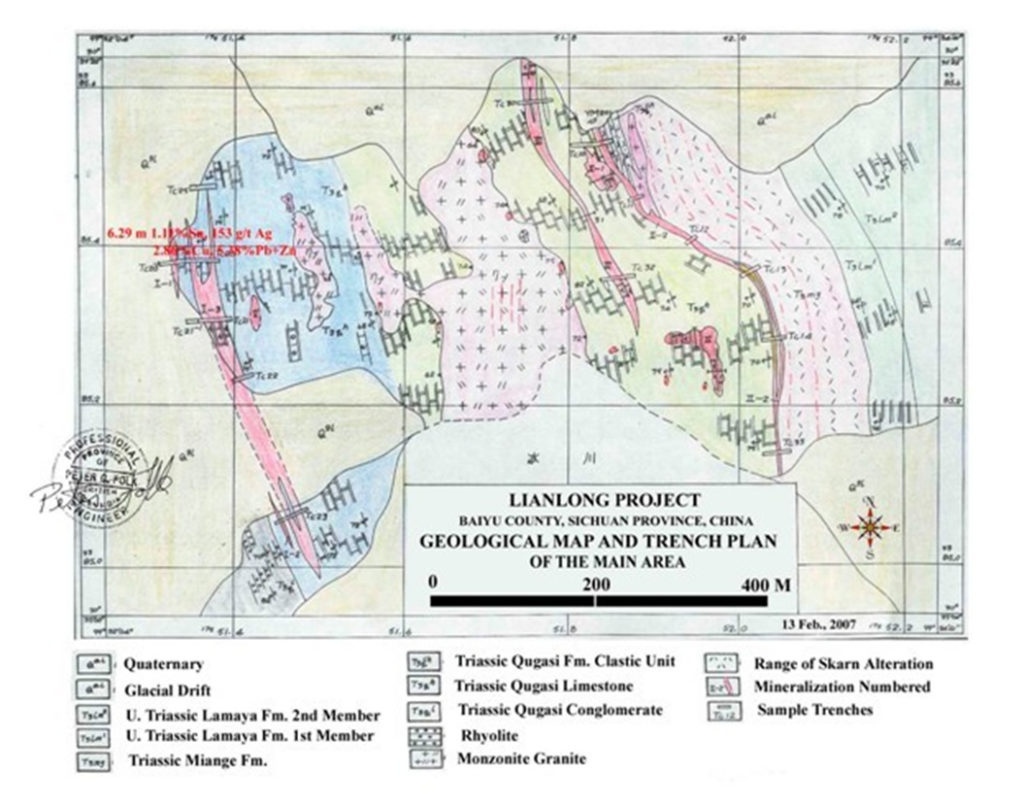 (Figure 6 – Geology Map and Trench Plan)  The figure shows the mineralization in red with trenches labelled so that they can be correlated with details of trenching results.

From 1978 to 1985 – Further geological-geochemical studies were conducted by the #108 Geological Brigade of the Sichuan Provincial Bureau of Geology and Minerals. Tin and silver mineralization in particular was identified.

From 1997 to 2000 – The Regional Geological Survey Brigade and the #108 Geological Brigade completed detailed work in eight mineralized areas.

Geochemical and geological work completed by the geological teams resulted in the discovery of three parallel, tabular-lenticular mineralized skarn zones, which were explored by trenching. Zone 1 has the most importance. It is more than 440 m long and up to 20 m wide, containing economically interesting values in Cu, Ag, Pb, Zn, and Sn (trenches TC20, TC21, TC22 and TC23). Trench TC20 contains the best interval of 6.29 m assaying 2.86 Cu, 153.6 g/t Ag, 5.38 combined Pb, Zn, and 1.11 Sn. The second mineralized zone, Zone 2, is 570 m long and up to 9 m wide, and the third is exposed for 340 m and has a maximum width of 15 m. A fourth zone is a small irregular pod with a maximum width of about 10 m. In general the tenor of Zone 2 to Zone 4 are less than Zone 1, but are still of economic interest. 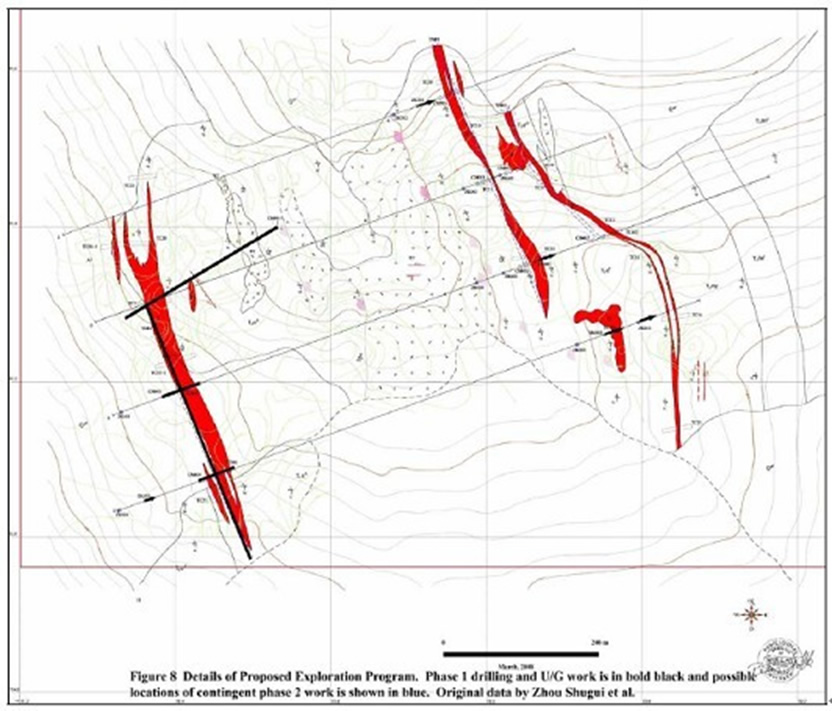 Contingent upon the results of the above work, a further 2,250 m of drilling and about 940 m of underground work would be recommended.